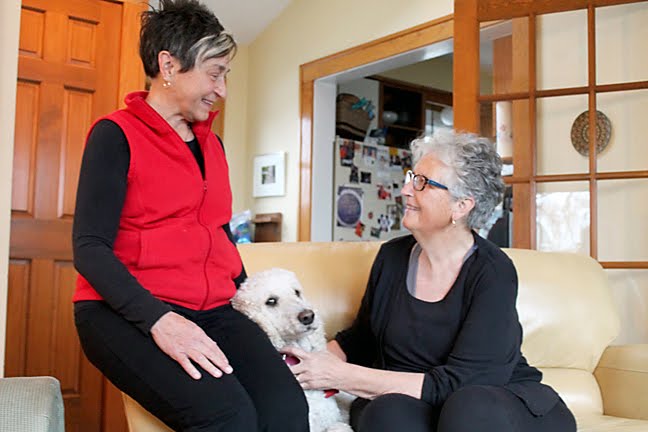 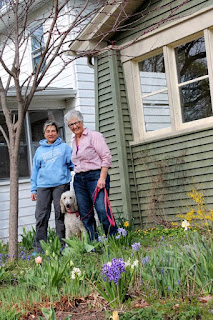 
On any given day on Lansing’s Eastside, Joann Neuroth and Carolyn Lejuste can be seen walking their dog, Dalva, around Hunter Park and the Allen Neighborhood Center. From a trip around town to a trip to New Mexico, they rarely go anywhere without her. “She just thinks the world revolves around her,” Carolyn said. “She’s a good traveler.”

Joann and Carolyn have been living on the Eastside since the 1970s, when they were both separately drawn to the town’s bustling lesbian community. They met here, when they were both dating somebody else, and ended up together. It has been 26 years since they began dating, and six since they were married by their Quaker church in town. This was before the Supreme Court decision to legalize same-sex marriage, but their congregation made it clear that they would recognize their union. After 20 years of being together without feeling the need to get married, their friends and family wondered why they suddenly wanted to tie the knot. According to Joann, their decision was sparked by an experience she had with her queer nephew. “It was pretty amazing to invite all the various family and work worlds we know, [to invite] 200 of our closest friends to come witness it,” Joann said. 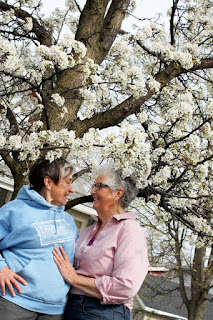 When Joann and Carolyn moved to the Eastside, they were both searching for an environment where they could be themselves and be a part of an active queer community. They were thankful for this opportunity, and as the years have passed, they have remained impressed by the welcoming atmosphere of the Eastside. Over time, they have also developed interest in other activities in the area, such as their Quaker church, Joann’s community of professional educators, and Carolyn’s community of disability rights activists. As the United States grows to be more accepting, they feel they do not have to be in a segregated subculture of LGBT+ people, which allows them to expand their social groups. “We have overlapping circles of people who take our time and attention and energy,” Joann said.

A current project they are spending their time on involves making plans for assisted living as they age. Every month, they meet with a group of women to chat about the possibility of creating a cooperative space, where they will help each other and hire assistance together. Though the details are not yet set, they plan to create an environment where they can remain independent but still get the help they need. Currently, the project is just in its initial stages, but they hope that it will eventually become something sustainable and they will have a community to rely on in coming years. 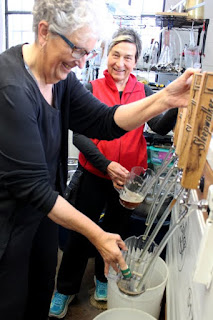 In addition to the supportive environment, Joann and Carolyn also love the freedom they have to travel as a result of lower costs of living on the Eastside. Last year, they purchased a Roadtrek RV and have spent lots of time traveling all across the United States and Canada. When they leave, they know they can trust their neighborhood to watch their house and let them know if something is wrong. For them, living on the Eastside is comfortable and happy.

“[Since] we have retired, we leave a lot, and we know everyone on this block,” Carolyn said. “We know that people are looking out for us all the time, and we are for them.”
Email ThisBlogThis!Share to TwitterShare to FacebookShare to Pinterest