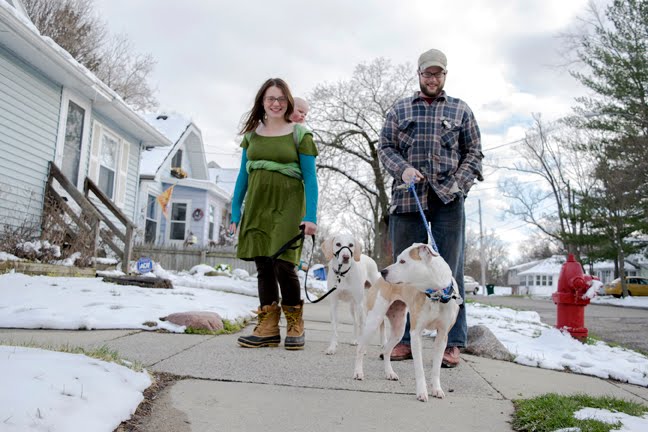 
In recent years, urban farming has taken off in the greater Lansing area, especially on the Eastside. One couple, Egypt and John Krohn, have been active contributors in the urban farming movement. About a year ago they moved into their Urbandale Neighborhood home to take advantage of the affordable land opportunities there. “We chose to live in Urbandale because there’s space to grow food here and a supportive community around food,” Egypt said. They own and lease several plots of land equaling about two acres, which they use to grow mushrooms, fruit trees, and a variety of vegetables and herbs, such as sweet corn and okra. They grow primarily for their own consumption but they also sell to close friends, farm markets, and several Community Supported Agriculture (CSA) networks, individuals who have pledged their support to the farm and receive fresh produce in return. In addition they raise chickens in their backyard and have two dogs, Cooper and Oakley. 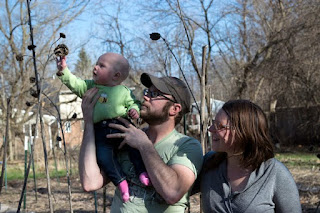 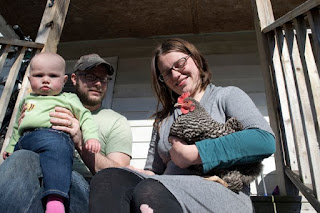 There are some challenges as well as opportunities to living in the neighborhood. “A really big thing with our neighborhood is that it’s primarily a flood plain. That is leading to a lot of abandoned homes,” Egypt explained. This is actually a major reason why they chose to settle in Urbandale. Many abandoned properties are deteriorating and being torn down, leading to urban farming opportunities. “It’s an unfortunate reality that these houses cannot feasibly be redeveloped,” she described. “But what is happening is this land is being turned into farms which helps to revitalize the neighborhood and benefit the community.”

Six months ago they gave birth to a beautiful baby girl, Éowyn, who has become the main focus for the couple, complicating their farming work. “It has been an interesting balance with taking care of her and playing with her and engaging with her, and trying to get work done,” Egypt said. “It’s a challenge but it’s working out— we’re finding that balance.” But the added challenges are more than worth it for the two. “We got lucky. She is the chillest, easiest baby possible,” they said with pride. “We’re doing pretty well, and we’re grateful.” And as their daughter grows up in this urban farming atmosphere they hope to emphasize certain values to her. “We just want to instill a good work ethic in Éowyn and teach her to be strong and independent,” John said.

The community atmosphere of Urbandale is another big reason they chose to start a family in the neighborhood. “We want Éowyn to value community and contribute her time and energy into being an active part of the community,” John explained. Specifically they love the closeness of the neighborhood and the outdoor involvement of its residents that has helped them to build relationships. Aside from farming, the family enjoys their time outdoors by renovating their yard, taking their dogs on walks down the street, or walking to nearby natural areas and shops. “We know many of the people on our street simply because we are always outside,” the couple remarked. 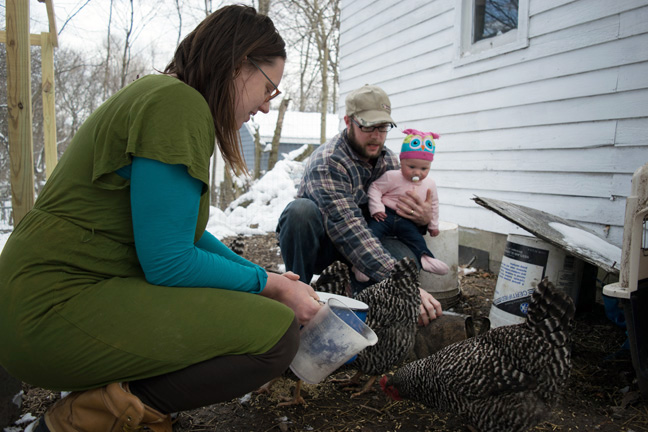