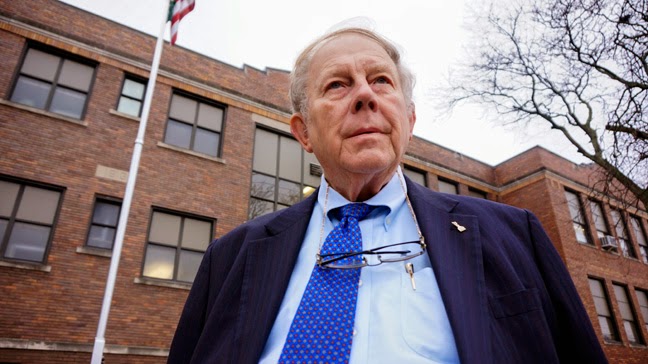 
Neogen Corporation CEO Jim Herbert has slowly grown into the Eastside since moving to Michigan with a few business-minded companions and a dream. “We crossed the border and saw a sign that said, ‘Will the last one out, turn off the lights,’” he said. “And we figured if people were leaving the state, they must have left behind some great buildings for us to work with.” Neogen has renovated large, vacant buildings across the city, including the old Allen Street School in the heart of the Eastside. “The only group that owns more buildings is the Lansing School District,” he stated with pride.


For over 20 years, Herbert’s company has helped transform and preserve local buildings in the area. One can feel the sense of memories return as he gazes up at the red bricks adorning his company’s properties. The first building, lovingly named the Doan building, prods the response of times past. “My first office was here in this building. We had to clean it up a lot, but I loved those days.”

Herbert mentioned that the neighborhood has been in a continual state of change, but the involvement between the food safety company and the neighborhood it calls home has grown closer over time. “We always try to be involved with the community. Any time there’s a fund or drive, we like to help out how we can.”

When it comes to the future, Herbert seems happy with how things are continuously improving in the communities surrounding his buildings. As we looked at the Allen Neighborhood Center from across the street at the old Allen Street School he said, “They’re doing some good things. The neighborhood center is there and I hope it remains as long as we’re here. It’s nice to have good people help foster this community.”
Email ThisBlogThis!Share to TwitterShare to FacebookShare to Pinterest