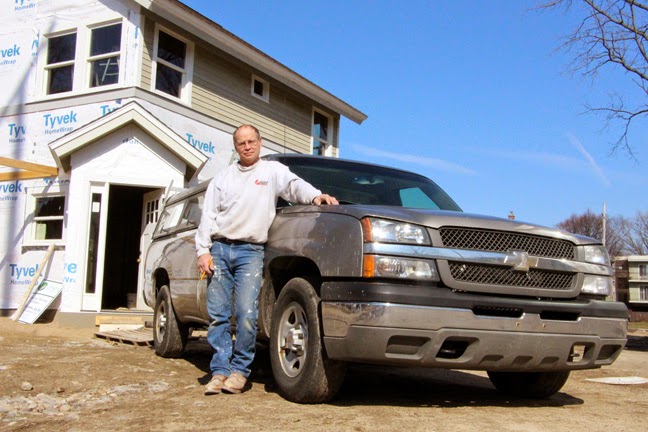 Dave Muylle has lived in the Eastside for over 30 years, originally moving to Lansing in 1976. He worked for a building materials company and eventually started a rental properties company. Specializing in restoring aging Eastside houses, Dave is currently working on making his dream of Cottage Lane a reality one house at a time. Cottage Lane is a “logical arrangement of people and machines,” with newly built cottages surrounding a green center space, which is essentially a small park in the middle of the block. This set up will take advantage of solar access and the nature surrounding the area. He wants Cottage Lane to be impactful and enticing, and believes in creating these houses with the best quality possible.

Dave has completed 10 full-scale restorations, naming each house he completes. He finds that while he’s in the middle of the restoration process the personality of the building reveals itself. He hides a small time capsule somewhere in the workings of the houses with things like a newspaper, letters written by his sons to the future owners, a few dollars and other little things. He also shares this accomplishment with the neighborhood by hosting popular open houses every time a house is completed, allowing people to explore gorgeous new additions to the project.

Besides working on Cottage Lane, he also made a 40-minute documentary film about the restoration of his own house, called Craftsman’s Style. Dave took inspiration from other DIY house renovation shows, except from a “on the ground, blue collar” perspective. The film was submitted to various film festivals in Michigan, and was also shown at a very successful fundraiser for the Allen Neighborhood Center.

The houses Dave has completed are absolutely gorgeous, and so is his personal style of architecture. He’s passionate about the effort that he puts in and it shows in the finished products. From the naming of the houses, to the time capsules hidden inside them, his personal touches make it so anyone would be lucky to live in Cottage Lane.